Home Travel and Tour Car Trip to the US: 7 Best Inspirational Places

Car trip to the US is an incredible adventure and an ocean of impressions. Even if this is a new experience for you, then rest assured that it will be worth it. America is full of stunning and breathtaking places. Ice caves and tropical islands, fantastic geysers and majestic canyons, endless tulip fields and the lights of the night metropolis – there are a huge number of places that can inspire you to have a car trip there.

What do you need for this? Simply book your car rental with Rental24H.com and check out the following list of unique destinations in the USA to visit…

On the Olympic Peninsula in the northwest of Washington there is a national park of the same name. The park was founded back in 1938 by Franklin Roosevelt, the 32nd President of the United States.

Due to the fact that the peninsula wask isolated from the outside world for a long time, many rare species of flora and fauna of North America, which are found only in Olympic National Park, have been preserved there. This is a kind of wildlife museum.

As a rule, when we go on vacation, our main goal becomes the desire to see as much new, interesting and memorable spots as possible – so that later we could tell with admiration about them to relatives and friends. One of such places is the Thor’s Well. However, it has several other names – this is Devil’s Churn, and Spouting Horn.

This majestic creation of nature is located in the state of Oregon, on Cape Perpetua, famous throughout the world for its beautiful sunsets. If you rent a car in Portland, it only takes you 2 hours to get to Thor’s Well.

Mono Lake is one of the most picturesque and amazing places on our planet. If you want to understand the feelings of a person who has fallen on another planet – gram a rental car and welcome there!

The lake is located among mountains in the Eastern California mountain range in California. Its area is 150 square kilometers, and its depth reaches 43 meters. It’s believed that Mono Lake belongs to the group of the oldest lakes on the Earth. Judging by the remains of volcanic ash, the lake was formed as a result of a violent volcanic eruption. However, under the layer of ash, deposits were found, suggesting that Mono Lake is part of another, more ancient lake, the depth of which even during the Ice Age reached 270 meters.

The border between the United States of America and Mexico is placed in the Californian desert. This is the location of the US National Park – the second largest in the country. It’s called Anza-Borrego Desert State Park, and covers the territory of 2,400 square kilometers.

Anza Borrego is a lifeless desert most of the time. But after the rainy season, it’s covered with a huge number of flowers. People come to admire this amazing spectacle and enjoy the delicate aroma from all over the world.

One of the most unique places on the planet is the Grand Canyon in Arizona. Over the course of several million years, the Colorado River eroded the plateau, carving its way through limestone, shale and sandstone, reaching hard layers of granite. To this day, it creates amazing structures of stone, continuing to deepen the canyon.

There’s nothing for the gaze to catch on to: you’ll see only red continuous plains and turquoise sky. The distant outlines of the canyon become pale due to the gigantic distances. The rocks are painted in fantastic yellow, purple, brown and red colors, depending on the rock layers and the intensity of the sun. 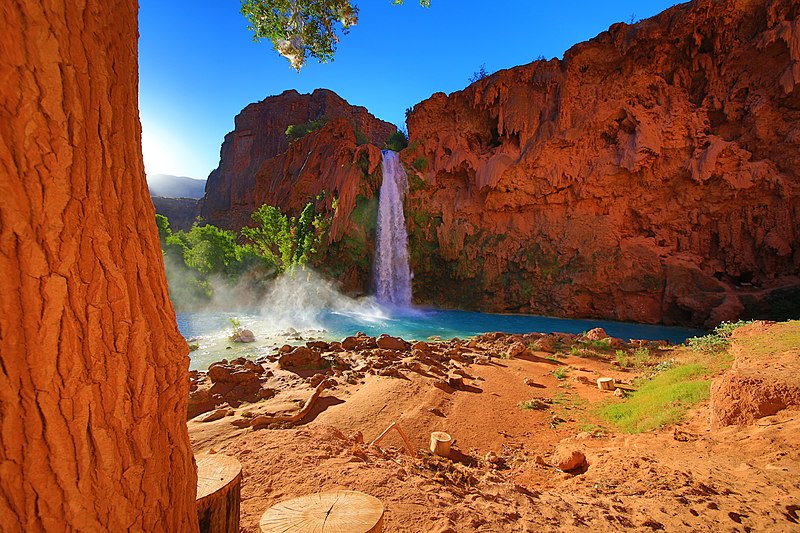 The relief of the Grand Canyon was finally changed by the floods of 1910. This is how the amazing Havasu waterfall appeared. It’s not distinguished by either height or grandeur, but it has an amazing appeal and magical beauty.

The height of Havasu Falls is 37 meters. The width of the water stream doesn’t differ in special dimensions, but its water acquires turquoise, blue-green and bright blue shades, falling into a natural lake. The magnesium and calcium carbonate washed out of the rocks give the stream such a rainbow color.

Hamilton Pool is located in the USA near Austin, Texas, so finding it in your rental car will be quick and hassle-free. It’s neither underground nor ordinary pool. Access to the sight is terminated only when it rains. Please note that making fires, fishing and walking your pets is prohibited in this area. But swimming in warm water, the temperature of which reaches 25° C, is allowed.

Hamilton Pool was formed as a result of the collapse of the roof of an underground river about a thousand years ago. This is how a unique reservoir appeared, surrounded on all sides by canopies of rocks with waterfalls flowing down after the rain. The popularity of the place has been growing since the 60s of the last century.

The lake has become a favorite vacation spot for residents of the nearby town, and over time, tourists began to flock there. The Hamilton Pool Nature Reserve has been declared since 1985.

The Easiest Hacks To Save Big On China Eastern Airlines Tickets

What is the Role of CSS and How Can You Embed...

An Ultimate Guide to become PMI-ACP Certified in 2021

Allergy sufferers have a 30% higher risk of having an accident

During Backpacking Reminders For the Guidance Of Spain

TOP 10 REASONS TO PURSUE THE CERTIFIED ETHICAL HACKER WHEN CONSIDERING...

Annapurna Circuit Trek. All you need to know in 2020

How to Increase The RAM Of Your Android Smartphone without rooting...

All About Stream2watch and Its Alternatives.

After deleting Files, Videos, and Pictures on Your Phone, do you...

Annapurna Circuit Trek. All you need to know in 2020

ABOUT US
Giant Gist is your new technology website. We provide you with the fact and uniques technology updates.
Contact us: contact@giantgist.com
FOLLOW US
© 2020 Giant Gist | All Right Reserved
MORE STORIES

The Easiest Hacks To Save Big On China Eastern Airlines Tickets